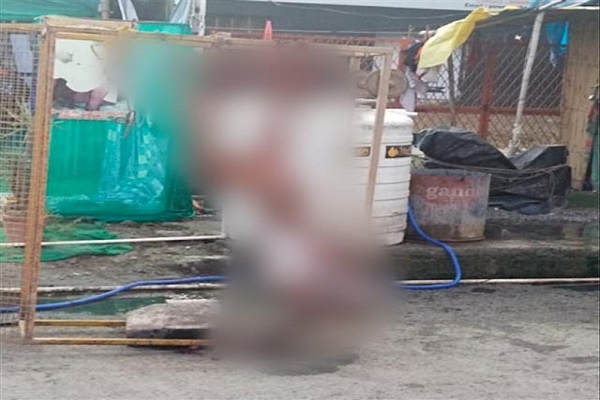 Singhu Border:- This was the brutal killing of the 35-year-old man was found hanging from a police barricade on October 15 morning.

A shocking incident, the chopped body of a 35-year-old man was found hanging from a police barricade at Singhu border on October 15 morning.

“At about 5 am today ( October 15), a body was found hanging with hands, legs chopped (off) at the spot where farmers’ protest is underway (in Kundli, Sonipat). No info on who is responsible (and) FIR lodged against an unknown person. Viral video is a matter of probe… rumours will linger,” The ANI quoted Deputy Superintendent of Police Hansraj.

In a video, which has gone viral, a group of Nihangs can be seen surrounding the man, with his hands chopped off

They first chopped his hands, then beheaded him, then hanged him in front of the entire so called Farmers protest. pic.twitter.com/hzaq4pq89Y

The Nihangs, reportedly, beat the young man – who has yet to be identified – to death for allegedly desecrating the Guru Granth Sahib, the Sikhs’ holy book.

In another incident last year, a Punjab cop had his hand chopped off by Nihangs with a sword in Patiala after he asked them to show them ‘movement passes’ during the Covid lockdown.

The ‘anti-farm laws’ protest venue has become a hub of criminal activity.

Last year, a girl, who had come from Kolkata to express solidarity with the anti-farm law protesters, was gang-raped by the unruly mob. The victim later succumbed in the hospital.

In another incident, a young farmer was burnt to death by the ‘anti-farm law protestors’.

The Chief Minister also claimed that these elements are spreading Covid-19.

It is not a secret that Khalistan and ISI are backing the anti-farm laws protest.

The protestors at the borders of the national capital have been raising Khalistan slogans and hailing Bhindranwale, who led the Khalistan Movement back in the 1980s.

On Republic Day, the anti-farm laws protesters marched to Delhi, injured many Delhi Police officers, and marched into the Red Fort.

They removed the National flag and hoisted the Khalistan Flag after banned Khalistan separatist organisation Sikh for Justice Chief. Pannu announced a cash prize for those who hoist the Khalistan flag on the red fort.

The same separatist announced the cash prize for those protestors who stop Prime Minister Narendra Modi from hoisting National Flag on Independence Day.